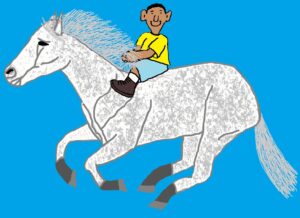 Had anyone who lived on 14th Street been outside other than Mrs. Magby that day, that person would have been surprised to see a 3-year-old on a horse gallop by.

No saddle. No bridle.

Just a boy, a toddler, holding tight to a mustang’s mane.

Was the boy smiling?

How did the 3-year-old get on that horse? you ask.

Richard Jones put me on that horse.

Richard Jones was a teenager. Mean. Diabolical and coarse.

He was older and taller than all the neighborhood kids, and he wore a perpetual sneer as if he despised the entire world.

He meant me harm when he put me on that horse.

He was a bully.

My adventure began when I came out of my house and noticed the neighborhood kids across the chicken pen admiring a horse.

I ran to Richard Jones’ backyard and joined the south 14th Street kids.

There was Ricky Hester, Shera Hester, Katie Mize and Barbara Jones, who was Richard Jones’ sister.

Where Richard Jones got the horse is a mystery.

He said it was his horse, but there was no place in his yard to keep it, and I never saw the gray dappled mustang again.

When Richard Jones noticed me, he looked right at me and said, “Katy Mize ain’t afraid to ride.”

Insinuating that I was afraid.

Everyone looked at me.

Katy Mize was my age, a cute little tomboy with wild hair so blonde it was almost white.

We were the youngest of the neighborhood kids.

She was my best friend.

She stood there in her dusty overalls and watched me too.

The horse grazed; then it looked at me.

The horse’s face and demeanor said “I’m content to stand and chew.”

The mustang’s eyes challenged: “Ride me.”

So I told Richard Jones to put me on that horse.

I figured we would have a nice walk around the yard.

But once on the horse’s back, Richard Jones stepped back and slapped that mustang hard on the butt.

The crack of the slap could be heard across the chicken pen, had anyone been there to hear it.

And off we shot, the horse and I, up the alley and left on 14th Street, the gravel road parallel to my lawn.

I’m sure the bully’s intention was that I fall off the horse when it bolted.

That would be hilarious, and I would get hurt.

But I thwarted his plan.

I rode that horse.

I rode it as hard as the slap on its butt.

I held the horse’s mane tight even as the stringy hair whipped my face.

I felt its muscles move beneath me.

The horse felt as an extension of myself.

I swear, the horse and I were one.

Now where would a 3-year-old learn to ride a horse like that?

I can’t say for sure.

Maybe I was reincarnated from a Hun or a Comanche or a Mongol; those were among the greatest horsemen of all time.

Maybe I rode well because my grandfather was a Texas cowboy,

A true horseman who drove cattle and broke broncos in his day,

A man who slept many a night next to his horse under a celestial canopy.

Cowboy runs in my blood.

Just as the blood of the first horses brought to the New World by the Spanish conquistadors flowed through the mustang.

Then there was my love of cowboy movies, which were all the rage back in the day.

They made riding a horse look easy.

My favorite cowboy though, was Antonio Aguilar, the ultimate charro, a horseman without peer who could make his horse pee on command.

He was a super star of the Mexican movies.

The John Wayne of Mexico, some called him.

They were all superior horsemen.

And they were my heroes.

Not to mention, best friend or not, I wasn’t about to let Katy Mize get the best of me.

At the time of this occurrence, 14th Street was outside the city, so there was considerable space between houses on that half mile stretch of gravel road.

I was lucky the horse didn’t turn right.

At the end of Richard Jones’ yard, to the right, was Lee Street, a paved, relatively busy road with a speed limit that could kill a boy and his horse.

The horse accelerated as it flashed past our chicken pen, and then my house.

I didn’t see my mother outside.

If only she could see me now.

I wondered if she would be proud to see me ride by on such a magnificent horse.

My grandfather would burst with pride at my wild ride.

Then there was Mr. Thayer’s ample spread on the right.

It flew by and was gone.

The horse ran up 14th Street as if a posse was on its tail.

It was running at full speed now, scattering gravel in its wake.

The Lone Ranger himself would be jealous of my horsemanship.

The Magby’s house was fast approaching on the left.

Just past the house, 14th Street ended at a barbed wire fence.

You wonder if I was scared.

I was too young to grasp the significance of the barbed wire fence and the horse’s momentum.

I saw Mrs. Magby kneeling in her flower bed digging around some flowers.

I saw the shock on her face when she saw the horse and me.

She turned toward her yellow stuccoed house and yelled “Stevie!”

That’s when Stevie Magby, her oldest son, probably 8 years old, burst out of the house and raced across his yard to north 14th Street.

He jumped in front of the horse, wrapped his arms around its neck and pulled the horse’s head down.

The horse skidded to a stop about a foot short of the barbed wire.

The horse was breathing hard.

I was breathing hard.

Stevie petted the horse’s face, and shushed it with horse-soothing sounds.

Unlike Richard Jones, the Magbys owned horses and had the proper respect for their abilities.

Mrs. Magby had some sharp questions for me.

I explained that Richard Jones put me on that horse and that Katie Mize wasn’t better than me.

So he jumped up behind me and we rode the mustang down 14th Street at a slow walk.

“What are you doing on my horse,” Richard Jones demanded of Stevie as we rode into his backyard.

“I didn’t say you could ride my horse. Get off him.”

He was imperious in his treatment of the younger boy.

But Stevie Magby was fearless.

He was one of those wiry country boys accustomed to hard work, his arms as solid as a gnarled mesquite limb.

Stevie didn’t move, except to look at Richard Jones and then spit at his feet.

He had just stopped a runaway horse, so Richard Jones didn’t intimidate him.

He told Richard Jones that if he ever targeted me again, he, Stevie Magby, would return and deliver unto him, Richard Jones, a thrashing he would never forget.

Stevie walked me home and told me to stay away from Richard Jones.

And you know what?

While Richard Jones still caused trouble in the neighborhood,

He never picked on me again.

I think he took Stevie Magby at his word.

I didn’t realize it then, but have since understood, the bravery, the heroism, of young Stevie Magby.

Without hesitation he put himself between the horse and the fence,

Thus, he may have saved my life.

Out of righteous indignation, Stevie put himself between Richard Jones and me and issued a challenge to the older boy, the bully.

Mess with me, the little brown boy down the street, and expect a visit from Stevie.

Despite it all, I wasn’t angry at Richard Jones.

If not for him, I would never have gotten the thrill that I got the day the horse and I flew up 14th Street.

And I wouldn’t have this story to share with you.

And yes, that was a smile on that boy’s face that day he rode up 14th Street.

To quote the Lone Ranger: “Hi Yo Silver and away.”

This story is dedicated to Stevie Magby, who was taken way too soon in a deadly automobile accident on Werewolf Hill. I will never forget his heroics. And Richard Jones, wherever your soul rests in this moment, thank you for putting me on that horse and giving me that wild ride up 14th Street.

Also, the story honors the memory of my grandfather, Ben Franco, a cowboy who in his day was as comfortable on a horse as he was on his feet.