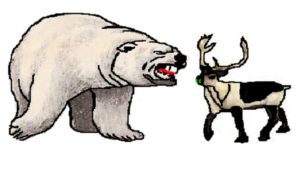 Rufus was a slovenly reindeer whose older cousin Rudy was a legend.

Cousin Rudy was famous because he saved Christmas when he led Santa Claus’ sleigh on a legendary foggy winter night oh so long ago. Rudy held the Reindeer Corps leadership position ever since.

Rudy was disciplined. He strove for perfection, and he demanded the same effort from the reindeer who trained to pull Santa’s sleigh.

“Christmas eve is a brutal night of reindeer pulling, but Christmas morning is when you separate Santa’s elite Reindeer Corps from the average tundra caribou,” Rudy loved to say.

“There is no margin for error on Christmas, and I will not tolerate mistakes,” Rudy warned his subordinates. “Many reindeer are called to pull Santa’s sleigh, but few are chosen.”

Rufus didn’t thrive on discipline. He was unruly, which irritated Rudy, who considered kicking his sloppy cousin out of the Reindeer Corps. Rudy tried and tried to make the free-spirited Rufus follow reindeer code, but to no avail.

Rufus had bad habits. He wiped the snot off his nose with his hoof instead of using the mucus-wipe Rudy insisted all the reindeer use in order to stay neat and sanitary. Rufus’ nasty habit led to his nickname Rufus the Snot-Nosed Reindeer.

Rufus also liked to tell jokes and pull pranks. He thought it funny to eat things that were not a part of the reindeer diet, such as tofu, and when the reindeer gathered in formation, he would launch a stinky fart and scatter the reindeer who didn’t find the joke funny at all. They have no sense of humor, Rufus thought.

Rufus didn’t keep his straw bed in a perfect rectangle as required, and he didn’t like to clean his stall. It wasn’t that Rufus was lazy or even that he was being contrary; he just didn’t think about keeping the stable tidy. That was because Rufus could think of only one thing, and that was wrestling.

Rufus wanted to wrestle. The love of wrestling consumed him. Unfortunately, wrestling was not a reindeer game.

One day as Rufus walked the coast, he came upon a polar bear surrounded by barking aggressive sled dogs. An Inuit hunter prepared to sink a spear into the bear’s body.

Rufus was a compassionate reindeer. He felt sorry for the magnificent bear even though reindeer and polar bears are not compatible. A polar bear will eat a reindeer.

As the hunter prepared to kill the polar bear, Rufus rushed the man and startled him so that he dropped his spear and fell. The dogs had never seen a reindeer trample a man so they stopped barking to gawk.

Rufus hadn’t trampled the hunter, who fell in a defensive reflex to the charging deer. The interruption gave the bear time to dive into the ocean. By the time the man and dogs realized what had happened, the bear was gone, and Rufus disappeared in a cloud of snow.

Unknown to Rufus, he had saved Nanook, the king of the polar bears. Nanook was curious about the charging reindeer with the snot on his nose and the not-so-pleasant smell. Rufus didn’t like to bathe either, so he had his own unique scent.

Also unknown to Rufus, Nanook stalked him for several days before he caught the reindeer near the coast, where Rufus challenged a puffin to wrestle. The puffin was thankful the bear interrupted, and it flew away relieved to be rid of the pesky reindeer.

“I would eat you, but you saved my life,” the polar bear king said to Rufus. “How can I repay the debt? I always repay my debts.”

“Wrestle me,” Rufus said without hesitation.

“Well OK,” he finally said, “but you have to come with me to the polar bear klatch, because nobody is going to believe this.”

So the two went to the bear gathering and prepared to wrestle.

The match began with Rufus trying to headlock Nanook, who couldn’t stop laughing. Rufus jumped on the great bear and draped his legs over the massive bear’s neck. 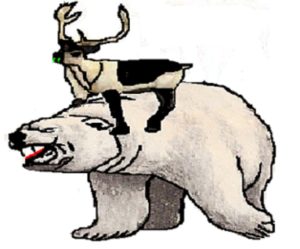 The move was too much for Nanook who gave in to the humor and tapped out. The other bears roared with laughter. It was the funniest thing they had seen.

The bears made Rufus an honorary polar bear that day. No polar bear alive would dream of eating the humorous reindeer, who entertained them with body-function humor, something polar bears prize more than ringed seal meat. Arrangements were made for Rufus to return the next day and wrestle another bear. 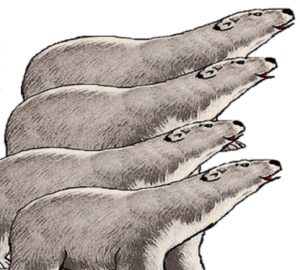 Rufus kept his adventures with the bears secret. Rudy was happy to have his careless cousin absent while the serious reindeer trained for Christmas.

Rufus was comfortable hanging out with polar bears. They taught him secrets, such as how to cover his nose with his hoof when stalking prey. The tactic didn’t work for the reindeer like it did for the white bears with their giant paws that easily hid their black noses. Rufus wouldn’t know what to do with prey anyway, unless it consented to wrestle.

Rufus honed his wrestling skills, practicing all sorts of moves and holds known only to those who love the sport. Every morning after rising from bed, Rufus left his straw scattered and hurried out of the training camp. Cousin Rudy didn’t complain.

And so life continued until the Christmas season was upon the North Pole. The reindeer trained constantly as Rudy put them through their paces over and over again in an effort to achieve elusive perfection.

Christmas Eve was one day away when a merciless evil befell Santa’s stables.

It was the flu. The virus swept through the stables. It moved deer to deer, dropping one after another onto their perfectly rectangular straw beds. Mrs. Claus busily cooked and delivered hot lichen soup to the fallen reindeer in hopes of reviving them for the long Christmas night.

The cure didn’t work. It was the swine flu, and everyone knows pigs and reindeer aren’t compatible. No reindeer, no Christmas. What was Santa to do?

Only Rufus remained healthy. That had not escaped Santa’s attention. Despite Rudy’s objections, Santa summoned Rufus on Christmas Eve morning.

“Ho, Ho, Ho,” Santa said with little conviction. “Christmas is in danger. Rufus, can you lead my sleigh tonight?”

Rufus was caught by surprise. He was ashamed to answer Santa.

“I haven’t been training,” he admitted. “Anyway, how can one reindeer pull a sleigh?”

“One reindeer can’t, but once when Christmas was in danger, your cousin Rudy saved the holiday,” said Santa. “Rudy’s blood runs through your veins.”

After about a minute, Rufus said, “I have an idea. I’ll be right back.”

Rufus left, and in a short time, he returned with four polar bears. They were Nanook’s sons: Hector, Ralph, Mookie and Sam.

“I will lead your sleigh,” said Rufus.

It was an unconventional solution, and Santa loved it. Few people know that St. Nicholas thrives on adventure. You can’t be a wimp and be Santa. So they harnessed the polar bears, but instead of taking the lead harness, Rufus climbed into the sleigh next to Santa.

“I’m in wrestling shape, not running shape,” Rufus explained. There is a difference.

The polar bears, accustomed to chasing prey across the ice and snow, took off at a swift run. Buoyed by the magic of Santa, they flew across the sky.

Never had Santa had a ride so fierce, so wild, so undisciplined. Rufus shouted instructions to the bears, who dug their big paws into the air, which felt like warm snow, if you can believe such a thing.

All over the world that night, kids got presents. Their parents got roofs with ripped and scratched shingles that looked like big bears had run across them.

When the sleigh returned to the North Pole, Rudy couldn’t help but be depressed. He fretted as he lay on his straw recovering from the flu.

He let Santa down. And now, he had to give up his leadership in the Reindeer Corps to the disorganized Rufus, who had earned the leadership spot by saving Christmas.

The day came when cousin Rudy had to turn over leadership to Rufus. Rudy sensed his bright spot in history would be dulled forever. Santa, Mrs. Claus, the elves, and the reindeer gathered at the ceremony.

“Rufus, you saved Christmas. I bestow upon you leadership of the Reindeer Corps,” Rudy said, the taste of black snow in his throat.

“As leader, do I make the rules now?” Rufus asked.

“Then I rule that you can earn your place back as leader of the Reindeer Corps without having to wait until next Christmas,” Rufus said.

“What do I have to do?” a shocked Rudy asked.

Rufus swiped his hoof across his dripping nose and said:

Maybe this isn’t the end after all. Read about the famous match between cousins in Rufus the Snot-Nosed Reindeer: The Reckoning.