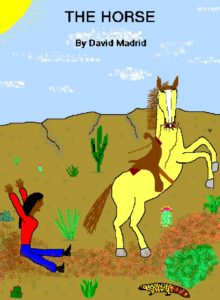 Sylvester Stallion stood in the corral chewing some cud, his mane gently flapping in the wind.

He didn’t really like cud, but because the cows were always chewing it, he thought, ‘What the ney?’ 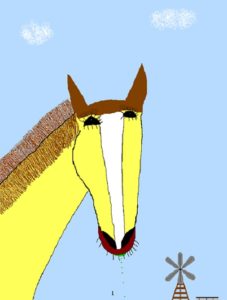 The cud was coarse and bland.

He spit the nasty wad out in a big green horse loogie.

He went in search of some hay. 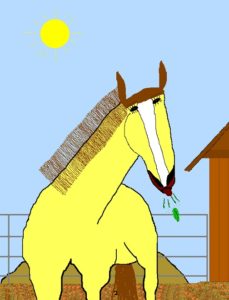 Sylvester had four friends: Mary Mare, Horatio Horse, Sharon Shetland and Gilbert Gelding, who stood by the hay and swatted flies with their tails.

“Ney,” Sylvester said, giving the universal horse greeting, which is short for neigh.

Sylvester approached his friends. He chomped down on some hay and chewed. It was much better than cud, that was for sure. 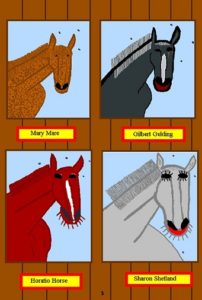 Sylvester contentedly smacked flies out of the air with his tail and watched as they dropped, stunned, to the ground.

Then he stepped on the flies. Sylvester hated flies. They always flew around bugging him by landing on his face and in his eyes. The only good fly was a dead fly.

Sylvester was a busy horse. 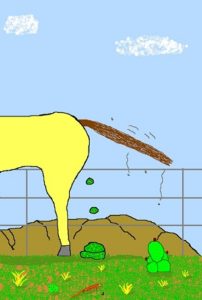 The yellow horse knew he was going to be even busier when he saw a yellow Camaro pull into the parking lot. The car matched his color. It must be fate that he should provide a ride for the driver, he thought.

Four girls got out of the car. 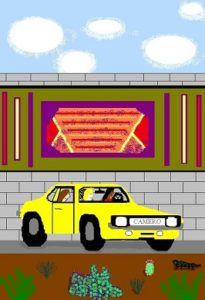 Sylvester watched the girls as they talked to Calvin Cowboy, his owner.

He heard the driver of the car, a cute black-haired girl, say she was a champion barrel racer.

‘Ha,’ Sylvester thought. ‘Mr. Cowboy will give her to me because I am the best dern horse in the world.’

It had been a while since Sylvester barrel raced, and he hoped the girl might race him around a saguaro or two before she brought him back to the stables.

Sylvester trotted over to the fence thinking. ‘Pick me. Pick me.’ 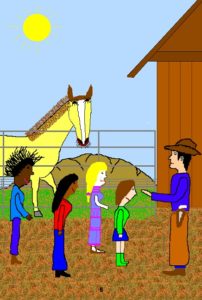 The other girls called the black-haired girl Jacque.

Calvin Cowboy looked right at Sylvester, and then told Jacque, “That’s the horse for you.”

The cowboy walked over to Sylvester Stallion and put a blanket, saddle, bridle and bit on him.

Sylvester was as happy as a colt in corn.

Jacque walked over to him and mounted him. 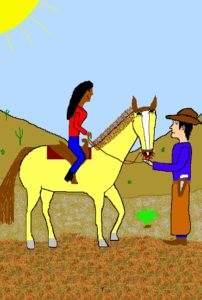 Whoa. Something was terribly wrong.

Sylvester’s honed instincts immediately warned him that Jacque had never ridden a horse.

She was a novice!

The devil came into Sylvester Stallion.

The girl had lied. He would have to punish her.

Sylvester transformed into his alter ego: El Caballo Diablo of Charlie Daniels’ fame. The Devil Horse. That was him.

“El Caballo Diabloooo,” Charlie Daniels, the great fiddler, sang of the great demon stallion. “Half devil, half horse they saaaaay.”

The devil horse moved to the music, which played in his mind. 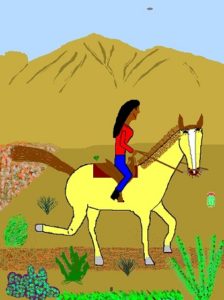 Jacque began to get as skittish as a thirsty horse near water.

And why shouldn’t she? She was on the back of El Caballo Diablo, the demonic horse.

The name was cool, Sylvester thought. He liked the mysterious Spanish flair.

He thought of Zorro. Of Cabeza de Vaca. Of Paul Rodríguez. 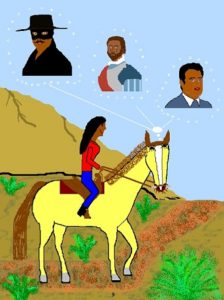 The blood of the first Spanish horses to set foot in the New World coursed through his blood. He danced to the thought of Charlie’s fiddle.

El Caballo Diablo could barely contain his glee as he anticipated the fun to come. 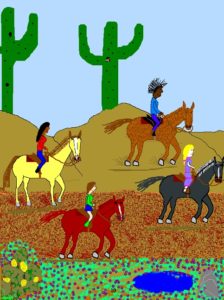 Jacque and her friends rode along, chatting amiably about stupid girl stuff such as boys, and who was cute and who was not.

Jacque, feeling braver and more at ease upon the stallion’s back, challenged her friends to a race. She gave the horse a hard heel, and the race was on.

The Demon Horse pretended to race, but he slowed and let the other horses pass. Soon the horses were out of sight.

The horse walked nonchalantly. Jacque whipped Sylvester several times with her reins and sunk her heels into his side.

The Devil Horse nickered, and then he bucked. 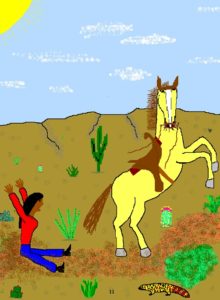 It was just a little buck, but it was enough to send Jacque flying.

She landed on her behind, making a sound much like that of wet horse biscuits hitting the trail. At least that’s what it sounded like to the old Gila monster who watched nearby.

A small cloud of dust rose around Jacque as she sat there dazed, two pancake bruises forming on her buttocks.

El Caballo Diablo had struck a blow for truth and horsehood.

The Demon Horse stood there reveling in his horse superiority.

Jacque got up. She was crying. Sylvester hadn’t expected that. Not tears, he thought. He hated tears. 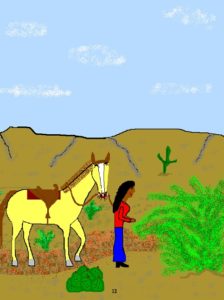 ‘There, there,’ he tried to tell Jacque. ‘Everything will be OK.’

But Jacque could not hear his thoughts.

He put aside the Devil Horse, and he was Sylvester again. He felt bad for the pretty girl.

He wouldn’t make-believe play anymore today. Jacque could get back on him, and he wouldn’t buck her off again, he promised.

‘One lesson in honesty and two butt bruises should be enough learning for one day,’ he thought.

But Jacque was afraid to get on Sylvester’s back again. She tied Sylvester to a mesquite bush and headed off on foot toward the stables. 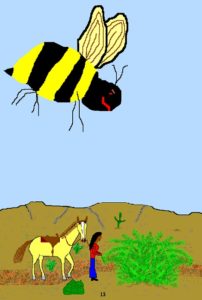 As Sylvester stood there by the mesquite patiently awaiting Calvin Cowboy, something terrible happened.

It was something so unthinkable that Sylvester hadn’t even given the possibility a thought.

It was Bully Bee!

Just like that, the little buzzer buzzed in and sat on Sylvester’s back, just out of reach of his lethal tail. 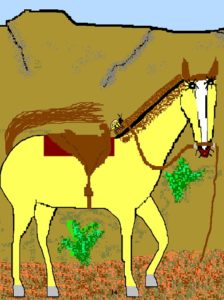 Sylvester tried in vain to swat the bee, but his tail was about six inches too short.

So Sylvester began to run, pulling the mesquite branches off the bush.

Still, Bully Bee wouldn’t get off his back. 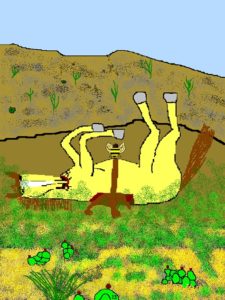 Sylvester fell to the ground and rolled.

Bully Bee just ran on him as if the bee was a tiny lumberjack running on a log spinning in the water. 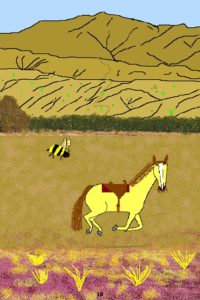 Nothing the horse did could shake the bee.

So Sylvester started to run.

And he ran and ran and ran, for miles and miles. Bully Bee jumped off the horse and flew just behind Sylvester occasionally buzzing the horse’s head.

Sylvester hoped to somehow outrun the stubborn bee, but Bully Bee was having too much fun chasing the panicked horse across the desert. 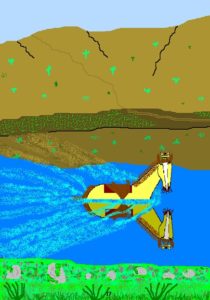 Three hours later, Calvin Cowboy caught up with Sylvester somewhere on the Salt River, where the stallion frantically swam.

Bully Bee surfed the Salt on the horse’s head.

Calvin Cowboy drove alongside the river’s edge in his pickup truck until an exhausted Sylvester spotted him.

The great stallion, now a thoroughly embarrassed horse, made for the riverbank.

Bully Bee didn’t like the looks of Calvin Cowboy, so he flew away, content with an exciting day.

The cowboy opened his horse trailer, and Sylvester Stallion walked right in. 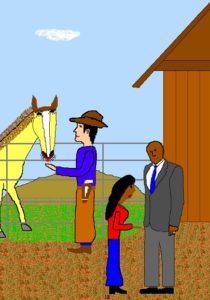 When they reached the stables, Sylvester trotted back into the corral, and pretended to be every bit the great horse his friends thought he was.

No stupid bee could scare him, he told himself. He was horse; hear him neigh.

He saw a big red-faced man with veins of anger bulging out the side of his neck lecturing the subdued Jacque.

Sylvester felt sorry for the cute girl with the dark hair, but he knew that the man was her father, and he was probably chastising her for lying.

What a bad habit. 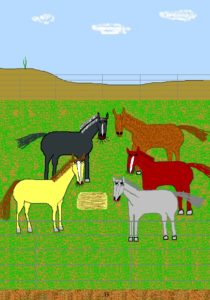 Jacque’s father was angry because she had cost him three hours of horse chasing, which was a tidy sum.

Sylvester walked over to his friends, who were busy as usual, chewing hay, killing flies and occasionally fluttering their lips.

They laughed as Sylvester told of the lying Jacque, and how El Caballo Diablo had instilled some real horse sense into her.

But then disaster struck.

It was Bully Bee. He was back.

The ferocious bee buzzed Sylvester, and chased the frightened horse around the ranch yard.

“Vengeance is mine,” said Bully Bee, quoting the Bible. He hoped to impart unto the horse a lesson taught in that great Book. He hoped to teach the stallion some humility.

Bully Bee stung Sylvester on the rump for being mean to the pretty girl. 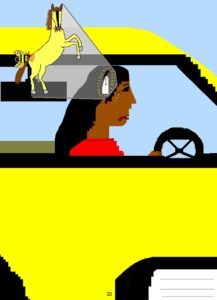 As Jacque drove home, she was quieter than usual, for somewhere in her soul, a horse was bucking.