So to add to the slop the farmer fed him, the pig stole food from his fellow farm animals.

First some of the chicken feed disappeared. Then the goat food came up short, and the hay given the horses and cows was light.

The animals complained to the farmer, who added a fence to keep the pig enclosed and away from the rest of the farm animals and their food. 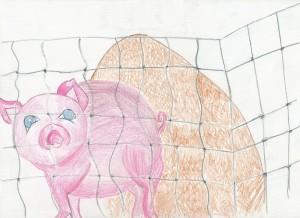 The pig greedily watched his fellow animals eat, and he just had to have their food.

So the pig, being a crafty hog, begged the animals for food.

“If I don’t have more food, I will surely die,” the pig lamented.

The compassionate farm animals were alarmed. They didn’t want the pig to starve, so they shared their food with him.

Still, it wasn’t enough food for the greedy pig. But try and try as he did, he couldn’t convince the animals to give him more food because the barnyard noticed the pig was still getting fatter.

But alas, the chickens were not smart, and the intelligent pig convinced them to give up their feed.

“If you don’t give me your food, your children will surely die,” the smart pig told them. As outrageous as that claim was, it was said with authority, so the chickens believed it.

The pig convinced the chickens to lobby for food on his behalf. He promised them if they could convince the other animals to give him food, he would allow them to keep more of their own food to feed their chicks.

The chickens, became hungrier and hungrier, and they ran around frantically wailing that if the farm animals didn’t give the pig their food, the children would surely die.

“Think of the children!” the chickens exclaimed.

Well now, that frightened the farm animals, who despite their better sense began to starve themselves so that their children could eat.

The greedy pig ate well as he gorged himself on the fear of his neighbors. 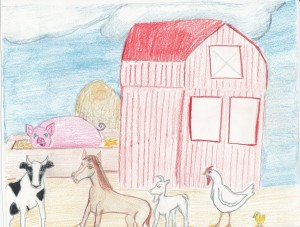 He got fatter and fatter. The farm animals got skinnier and skinnier. Their children ate less so that they would not starve. None of the animals recognized the absurdity of that.

Soon the chickens were asked to donate even more food so that the pig could eat. The chicks were hungry, but the pig promised the chickens that the only way to save their children was to give him more food.

“Think of the children,” he said. With that one powerful phrase, all reason left the animals and they succumbed to their deepest fear.

In an offhand way, the pig added, “Unfortunately, one or two chicks might have to starve to save the others.”

It wasn’t long before the farmer noticed his animals were starving. He surveyed his farm.

He noticed that one animal, the pig, was doing very well, and surprisingly, he was getting fatter.

He noticed that the pig pen was stockpiled with so much food that the pig would never be able to eat it all. Indeed, some of the food was rotting.

It was then that the farmer realized the value of his pig.

So the farmer did what any good farmer would do: he sold the pig to the butcher. 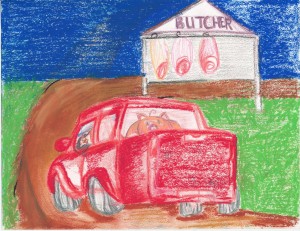 Then he tore down the pig’s fence and allowed the animals and their children to eat what had once been their own food.

Moral: Never allow a greedy pig to steal what is yours and your children’s.