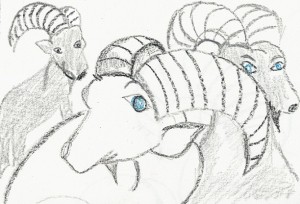 The Three Billy Goats Gruff were brothers bored with grazing their meadow.

They noticed a lush green field across the bridge, so the youngest Gruff brother took off across the bridge thinking that the saying, ‘The grass is always greener on the other side,’ was so true.

As he crossed the bridge, an ugly troll, who looked disturbingly like a graying grandfather, came out from under the bridge. 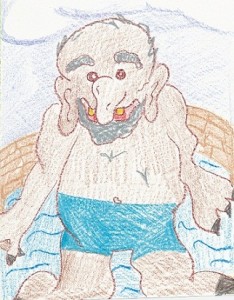 “I’m going to eat you for breakfast!” the belligerent troll threatened.

The quick-thinking little goat said: “Eat my brother; he’s bigger than me.”

“You have a brother?” the troll asked.

“Yes, he’s right behind me,” said the little goat.

“OK. Go on,” the troll said. The little goat crossed to the field and ate some tasty green grass.

The second oldest goat trotted across the bridge. The vicious troll jumped out.

“I’m going to eat you for breakfast!” the old troll snarled.

“Please sir, don’t eat me,” the Gruff brother begged. “My brother’s coming over the bridge in a while. He’s a lot bigger than me.”

“You have a brother?” the greedy troll asked. His stomach grumbled. He was really very hungry.

“Let me smell you,” the troll demanded.

The Billy Goat Gruff approached the troll, who sniffed him thoroughly. The hungry troll’s mouth watered at the thought of eating the biggest billy goat brother.

“OK, go ahead,” the troll said, and the middle goat Gruff joined his brother in the fragrant meadow.

As the hungry troll waited under the bridge, he heard a CLOP, CLOP, CLOP. He smiled, realizing just how big the oldest billy goat was.

The starving troll jumped out on the bridge.

“I’m going to eat you for breakfast!” he growled. 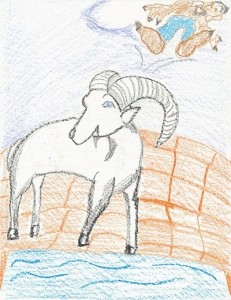 Whoa. That was one big billy goat.

The oldest goat Gruff charged the troll. He butted the nasty old coot with his heavy horns hard in the stomach.

The old troll tumbled off the bridge and into the river and was never seen again.