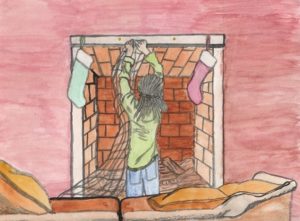 I want to tell you a story about Rastas Boodrow. He was a strange little dark boy with a head of dreadlocks who laid a trap for Santa Claus one Christmas.

Why a boy would do a thing like that was beyond me, until I heard the story.

Rastas hung a net above the mouth of the fireplace. He figured that when Santa crawled into the house, St. Nick would trip a wire and the net would drop, and then the legendary gift-giver would be captured.

The boy took what he roughly figured to be Santa’s size and reduced it using decimals. Santa would be the size of a 1.5-foot tall child to get down that chimney, Rastas estimated.

Rastas would capture the jolly old elf. Yes he would.

Like I said, Rastas was a strange little boy, but he was also intelligent. His motivation was simple and harmless. He wanted a Christmas present, preferably a shiny red bicycle. And he knew who could get him that present. Santa, that’s who.

But Rastas hadn’t been the best behaved boy this year, so he was afraid that Santa might leave him a lump of coal for Christmas. There wasn’t anything under the tree yet. Rastas felt he deserved a Christmas present, but he had to convince Santa.

On Christmas Eve, Rastas camped the night on the couch by the fireplace.

On Christmas morning, about 1 o’clock, Santa came down the fireplace. He set off the trip wire that dropped the net. Santa was caught.

Rastas noted with satisfaction how closely he had calculated St. Nick’s size, about 1 foot 10 inches tall, or 1.83 feet using decimals. Good thing he hadn’t estimated the bulging little belly; Santa was fatter than he had imagined.

Once caught, Santa tumbled out of the chimney, and he grew to his true size. Rastas had correctly estimated the growth; the net held. 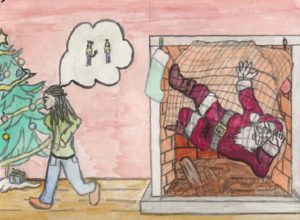 The jolly old elf gave Rastas a look of disbelief and asked him: “What do you think you’re doing Rastas?”

“Well sir,” Rastas explained. “I haven’t been the best-behaved kid around, so I just wanted to plead my case for a toy instead of a lump of coal.”

Rastas blurted out his explanation before Santa could interrupt: “I’ve really been a good boy. I’ve just had some setbacks. Mistakes have been made. I didn’t mean to put a frog in my sister’s lunchbox. It was the bad elf who told me to do it. When I didn’t turn in my math paper, it was because that evil elf told me I didn’t have to do that homework.”

Santa was intrigued by the bad elf explanation.

“And I saw you say hello to that lonely little boy Carlos who doesn’t speak English very well. It was on the playground that morning you ran for three touchdown before school. Nobody wanted Carlos to play on their team, and you stepped up and said ‘Carlos is on my team.’ You remember when you ran those touchdowns Rastas?

“My naughty-or-nice list shows there is nothing but good in your heart Rastas. You could improve on those naughty things you did though, and don’t hide your clothes under your bed anymore. You know your parents hate that.

“But Rastas, there’s one thing I can’t tolerate, and that’s you lying. We both know there is no bad elf.”

“But Santa, there is a bad elf. He gets me in trouble all the time,” Rastas insisted.

“Where is this elf?” Santa asked, his eyebrow of suspicion arched way up high.

“He’s right here in my heart Santa,” Rastas answered. “And I wish he would stop getting me in trouble.”

Santa didn’t know what to believe. Rastas truly believed there was a bad elf.

Finally, Santa said: “Set me free Rastas. I’ve got a heart scope in my glove box. I’ll see if there is a bad elf hiding in there.” 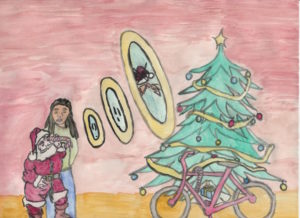 Rastas did as he was told, and Santa shot up the chimney. Rastas briefly wondered if St. Nick was coming back or if Rastas had been tricked into setting him free.

Santa did come back with a red and white heart scope that looked just like a candy cane. Santa put the scope against Rastas’ chest and stuck the other end into his own ear.

And sure enough, Santa saw the bad elf that lurked inside Rastas. How Santa can see with his ear is a mystery to me, but he looked into Rastas’ heart, and he recognized the elf was a mischievous little boy.

“Rastas,” Santa said, “that little elf in there isn’t so bad. There’s also a good little elf in your heart. He is your twin and his name is Rastas too. So when your ‘bad elf’ tells you to do something you think might not be right, you ask your twin elf Rastas what you should do, and you listen to him. Your good elf will never lead you astray. He will always tell you the truth. You just have to listen to him.”

Santa’s sudden disappearance took Rastas by surprise. He thought Santa left without leaving him a present, but when he turned to look at the Christmas tree, guess what he saw there?

That’s right. There sat a shiny fire-red bicycle just like the one Rastas wanted. And there was another present too.

Santa left his heart scope. Surely that was a valuable artifact. But do you know what Rastas did?

Read “Rastas Boodrow: Mathematical Mastermind“, a blog in which you learn more about a little boy genius.