Gilbert was a fearful hummingbird. He heard that humans ate birds for Thanksgiving. He had nightmares of being baked in a pan.

But Gilbert frequently saw a little person on the ground below his nest. A young hummingbird would be a nice Thanksgiving morsel for that boy, he thought. 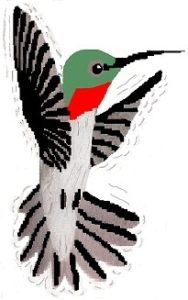 Gilbert flew high in the jacaranda tree. As he got bigger, Gilbert needed more energy to keep his wings moving faster and faster. He had to venture lower to eat insects and to sip the sweet nectar of flowers.

“Look Nana,” he said to his grandma, “It’s a dancing hummingbird.”

Gilbert was a nervous bird. He didn’t like the attention from the boy and his Nana. I can see the hunger in their eyes, Gilbert thought.

Gilbert’s favorite place to hunt was a mesquite tree with thorny branches that brushed the jacaranda’s leaves. He loved to hover around the mesquite tree and feed on the little insects that frequented the sticky leaves.

The insects were so tiny Damien couldn’t see them. All he saw was a dancing hummingbird. Damien wanted to dance too.

The day before Thanksgiving, Gilbert and Damien watched each other. Gilbert ate; Damien played. A big kid, probably 6 years old, came along. Damien, 4, was happy to have a friend to play with, and an older friend at that. Nana saw no need to supervise the playmates, so she told Damien not to leave the yard, and she went inside.

Gilbert, as usual, was hungry from rotating his wings 50 to 60 times a second. Contrary to popular belief, hummingbirds don’t flap their wings. They rotate their wings in a figure 8.

Gilbert dropped from his nest to the mesquite tree to feed. He tried to be sneaky and prayed the boys didn’t notice him.

The big kid saw Gilbert. He picked up a rock and flung it at the bird.

Ha! Gilbert thought as the rock narrowly missed him. You’re not gonna eat me for Thanksgiving, Gilbert chirped as loud as he could. Nobody heard him because a hummingbird chirp doesn’t carry far. Gilbert couldn’t wait to tell his mother he was right about hungry humans.

The hummingbird rapidly ascended into the jacaranda tree and to his nest, which was built like all good hummingbird nests, in a high crook of the tree shielded from the wind and sun. The big kid couldn’t see the bird, but he threw rocks into the tree hoping to get lucky and strike the little hummer.

“Shut up,” said the big boy. He threw another rock.

Damien stepped to the boy and took him down with a jiu jitsu move he saw on TV. The swiftness of the move shocked the big kid. He got up and ran.

Gilbert was a suspicious hummingbird. He feared a plot to gain his trust. Damien searched the tree for any sign of the bird. Gilbert didn’t like the way he peered into the tree; it was a hungry peer. So he stayed hidden until Damien went inside.

On Thanksgiving Day, Damien brought a bright red apparatus to the mesquite tree and hung it from the lower branches.

It has to be a trap, the hummingbird reasoned.

Damien’s family had company, so the boy went inside the house and didn’t return all of Thanksgiving Day.

The next day, Gilbert was happy that Thanksgiving was over. I’m safe for another year, he thought. I guess I should check out the new red thing hanging from the tree. The bird warily dropped to the mesquite tree to investigate.

It was a feeder! Sweet sugar water! Gilbert’s hunger overcame his fear. He fed and fed, occasionally backing off the feeder to hover in digestive bliss. He didn’t notice as Damien watched him from the porch.

“You were right,” Nana, the excited boy whispered. “With a little sugar, his dance is more graceful than ever.”

In his imagination, Damien’s feet were hummingbird wings, and he danced within the currents of the wind, swaying and spinning ever higher until he broke free from the confines of earth and reached the very stars.

There he danced among the angels who transformed into a million dancing hummingbirds sharing the beat with one tiny bird far below feeding on sugar water.

As with most holiday stories these days, we offer a blog for this story: Thanksgiving: A Bird’s Perspective