The bloodthirsty chupacabra watched the street from the trees. He was hungry. Really, really hungry. He was a beast.

It had been a long trip from South America to the Valley of the Sun.

Few people in this part of the world know that chupacabras exist. If he was lucky, it would remain that way.

This was the biggest city he had seen. Easy pickings, he thought.

The chupacabra was a violent animal. He didn’t just drain his prey of blood like other chupacabras; he ripped them apart. And while his name, el chupacabra, the goat sucker, reflected his preference for goats, he didn’t mind draining an occasional sheep. 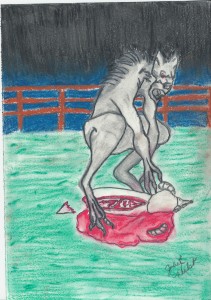 As twilight approached, the predator hunted, but he couldn’t find a goat. What kind of a city was this where there were no goats? Or sheep?

The chupacabra flew from one wooded area to another, always keeping to the treetops. He saw little beings coming out of their houses. They were ghouls and witches and little green monsters.

There were superheroes and bandits. Fairies and hobbits, wizards and werewolves.

The chupacabra smiled an evil smile. He was truly terrible to behold as he contemplated the unthinkable, the draining and murder of a child. He was famished.

This chupacabra was an ugly animal, even when compared with others of his species. He was big, a good 4 feet tall. Most chupacabras struggle to crack a height of 3 feet.

He walked on two long feet, each with three eagle-claw toes. His short sinewy arms ended in long sharp fingers.

He had large oval blood-red eyes that glared. He always glared. People who have reported chupacabra sightings often mention the creatures’ alien eyes. Is the chupacabra extraterrestrial?

It is a mystery my friends. But there is something about him that is not of this world, him with his serpent’s forked tongue and greenish-gray hue. His leathery hide. Just weird.

The creature is a sight to behold. If you encounter a chupacabra, it will scare you, but it will probably flee. Traditional chupacabras remain hidden from view. They generally avoid people. They hunt under cover of darkness.

This chupacabra was different. Everything about him screamed strength and power. He was a chupacabra to be reckoned with. He was fierce.

The creature watched the short characters below him.

He would swoop down and snatch a straggling child, bring him into the tree and feast.

Down the block, Elvis was preparing to gnaw a pig ear. No not that Elvis. This Elvis was nothing but a pit bull and a hunk a hunk of canine love.

Elvis was a honey-colored mostly pit bull. Four boys came to the pound one day to find a dog, and they found Elvis. Or really, Elvis found them. As they passed his cage, the little mutt ran to the glass and played to the crowd.

It was love at first sight, for the boys and for the pup. It was destiny that they should be together.

“He’s the runt of the litter,” their dad complained, but he was unable to dissuade the boys from choosing Elvis as their dog.

Tonight, it was a full-grown Elvis who sat still. He listened. He sniffed the air. The boys were with their mom trick or treating. Elvis stayed behind with their dad to hand out candy.

Something was not right. He stuck his big dog tongue out and tasted the air. It tasted of bloody danger. Evil. He ran to the front door and barked frantically. He scratched desperately at the door.

When the dad, who was outside, opened the door to see what the fuss was, Elvis shot out and ran.

He had to find the boys. He sniffed the sidewalk, caught their scent and locked on. He ran faster than he had ever run, and many a mom and her offspring were startled to see such a big dog racing down the street.

Elvis was big for a pit bull. He was about the size of a Rottweiler but with pit bull features. Like the chupacabra, he too was powerful. He rippled with pit bull muscles. This loving dog could turn into a fearsome fighter if his boys were threatened.

Weeks ago, a 4-foot rattler reared its ugly head and threatened the boys as they hiked the desert. The snake was cocked for the strike when, with lightning speed, Elvis seized the reptile behind its head and killed it in three hard shakes.

The dog would gladly give his life for his boys.

He saw them finally. 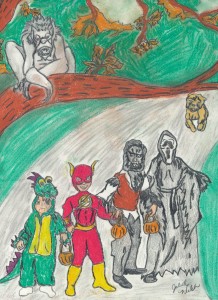 Up in the tree, greedy red eyes glared down toward the ground. Four little characters and their mom walked below.

The smallest boy, who tended to lag, looked like a chupacabra. The small boy was actually a dinosaur.

The youngest brother looked up and saw red eyes glaring down from the tree. Those eyes scared him. They were mean eyes. Cruel eyes. He started to tell his mother when the chupacabra flew at the little dinosaur. The boy screamed.

Inches before the chupacabra took the boy, something hit the beast hard. It had him by the neck and it hurt. The chupacabra and dog rolled about 4 feet. They raised a racket that drew everyone’s attention.

Elvis had the demon by the throat until the pit bull hit his head on the concrete sidewalk and his jaws popped open. The chupacabra was up and hissed white fire. He was too hungry for nonsense. He would dispense of this pesky dog and then take the kid.

But Elvis recovered and attacked. The swift reptile-like creature sidestepped the dog and then sank his teeth into Elvis. 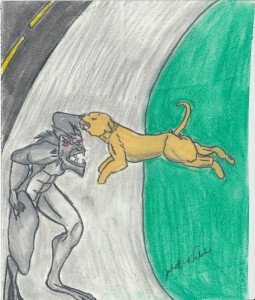 The pit bull howled in pain, but he knew his boys’ lives were at stake. He fought like a crazy dog. He spun on the chupacabra and locked his jaws on the beast’s arm.

A pit bull can clamp down with a powerful bite, about 235 pounds of pressure. The chupacabra screamed, and the pungent smell of sulfur filled the air.

The chupacabra couldn’t escape the dog’s grip. He twisted and turned and tried to fly away, but he couldn’t get loose. He tore at the dog with the sharp nails of his free hand. But Elvis didn’t let loose. He slammed the chupacabra to the ground and bit down harder.

The oldest brother picked up a rock and flung it at the chupacabra.

“Hit him in the head,” he yelled to his brothers. The boys picked up rocks, which were plentiful with all the desert landscaping, and stoned the chupacabra.

The brothers were fairly accurate rock throwers having rock fought in the desert more than once. Their battles against their cousins were legendary among rock-fight enthusiasts.

The chupacabra had to stop tearing at the dog to fend off rocks.

The melee was a bloody affair, and the chupacabra met his match. The violence he had visited upon many a hapless victim was returned to him threefold that night. The pit bull tore the arm off the shrieking animal and relaunched himself onto the chupacabra and ripped at him with sharp pit bull teeth.

That night, the chupacabra felt how it was to have life brutally bled out of you. He was finally dead. Dead as the rattlesnake that had come before him.

Elvis dropped to the ground a bloody mess. He whined softly. When the boys ran to him, he feebly wagged his tail. His boys were his life. They were safe.

The boys’ parents were appalled that this creature, something they had never seen, had almost attacked their youngest son. Had the brothers been of weaker stock, they would have been traumatized by the violence and the blood and the prospects of what this vile creature had almost done.

When the police saw the dead animal, they called the Game and Fish Department. A game warden came, took a lot of pictures, asked questions and took away the animal’s carcass. Everyone, the police, the game warden, the neighbors, agreed they had never seen such a creature.

The dad had heard stories of el chupacabra, but he didn’t mention them. He was civilized after all and not some superstitious bumpkin.

In this part of the world, some people have heard of chupacabras, but few believe they exist. Backwoods superstitions from Mexico and South America, the big city folk scoff.

Elvis was taken to the animal hospital where he spent a couple of weeks recuperating and undergoing tests for rabies and other diseases.

After a month the Game and Fish Department ruled tests of the chupacabra’s body were inconclusive. The department experts insisted the dead animal was a large dog, maybe a coyote, so stricken by mange that it lost all its hair and became deformed.

In other words, it was a mangy mutt.

That’s what they said, but everyone who witnessed that Halloween fight knew better. They knew that was a lie. They saw a short, powerful animal that looked part reptile, part extraterrestrial.

It was a bloody vicious animal. A killer.

Not to mention, since when did dogs fly out of trees?

The Game and Fish Department was not swayed off the mangy mutt theory.

Elvis came home and took up his post watching over the boys through the night. Aside from some stiffness and scars, he was his old self.

The boys slept comfortably. They knew their faithful pit bull would keep them safe

The boy was startled to see the pit bull’s eyes were red and shiny. Looking back at him were mean eyes, eyes he had seen looking down at him from a tree. 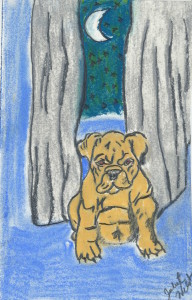 Also read The Night of the Goatsucker: a blog