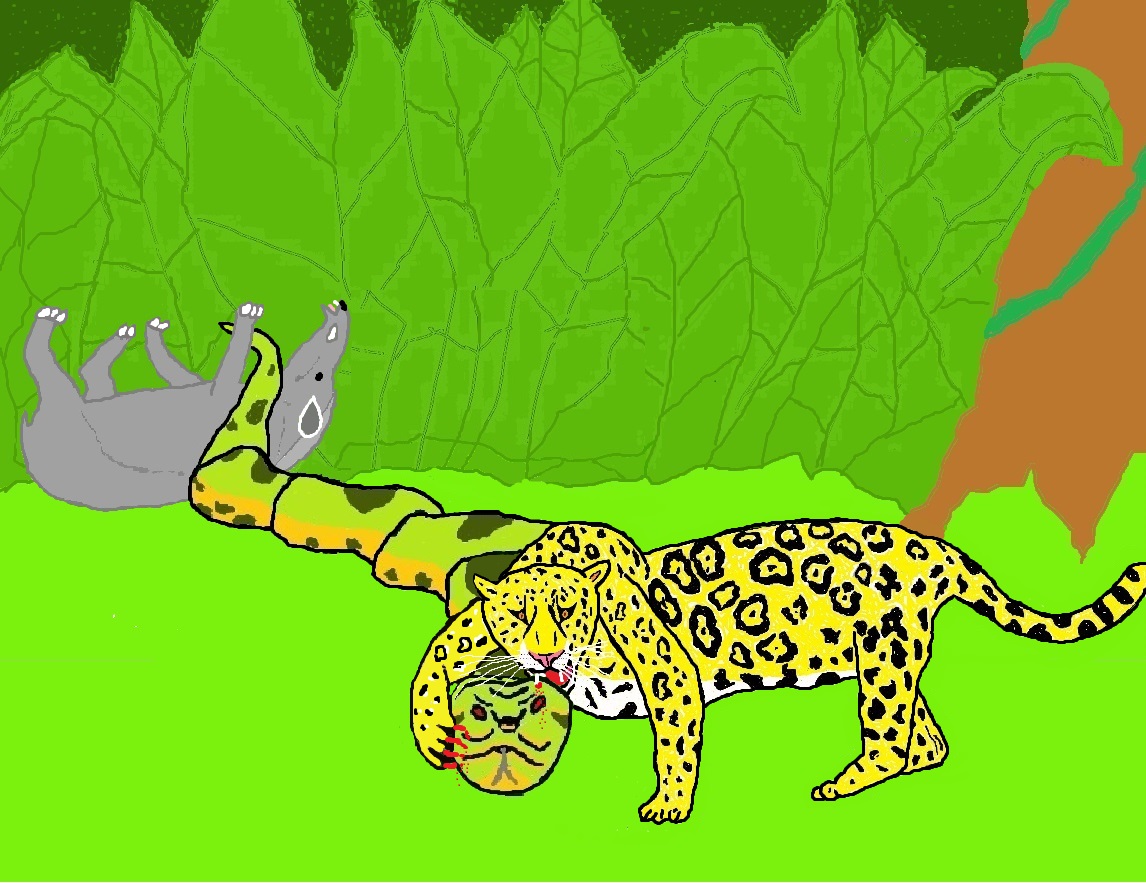 Story and art by David Madrid

Pretty much a true story

He stood there, legs stiff, tail pointed straight out, nose jutting into the wind. 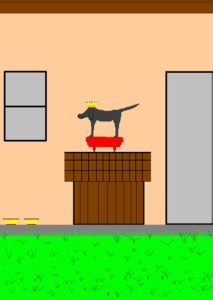 He was no regular dog.

He was a king.

A sleek, black mutt that needed no certificate of breed to convince him he was the best.

The dog’s master was a funny-looking boy with big ears, who after a brief conversation with his siblings, named the dog after a great man.

He named him after a fighter, a pugilist. A sleek, black champion who floated like a butterfly and stung like a bee. 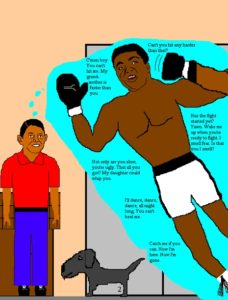 A young lightning-fast boxer whose words were faster than his feet.

The boy named the mutt after that brash, big-mouthed fighter named Cassius Clay.

But the boy and his brother and sister didn’t name the dog Cassius as a compliment. They hated the champ. They hated his arrogance.

“I am the best,” the heavyweight champion of the world shouted. 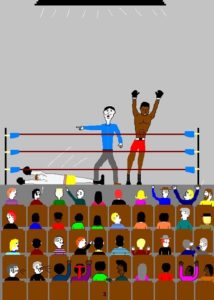 “I am the prettiest,” he bellowed.

“I am the greatest!”

Unfortunately for the boy and his siblings, the champ didn’t lose, and it was unlikely that he would lose anytime soon.

The two brothers and their sister joined millions of Americans in rooting against Cassius Clay, the heavyweight champion of the world. 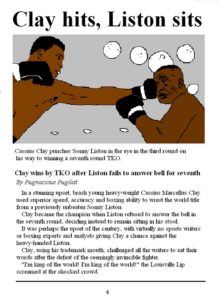 So what better way to get back at the show-off boxer than to name a black mutt after him?

You might think the dog was upset to be named after someone the boy despised, but the dog was OK with it. He forgave the boy.

What the siblings could not see, so blinded were they by their hate of the champion, was that the boxer Cassius was an honorable man.

He was a king. 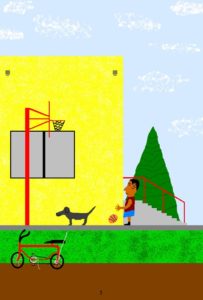 The royalty coursing through the boxer’s blood wasn’t the worthless royalty with which some are born.

No. It was the earned royalty that only those with great dignity and unshakeable integrity possess.

It wasn’t long after the family adopted the canine that the mutt showed the boy his character.

Never in the history of the world had there been a dog so loyal, so loving, so protective and so silly. Of that the boy was sure. 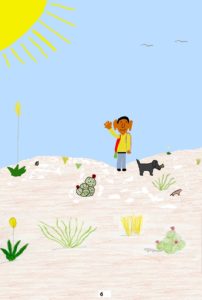 The dog took the boy with him everywhere he went.

Cassius, a descendant of hounds, had long flapping ears.

The dog assumed the boy was part hound too as he watched him awkwardly tag along with his bouncy boy ears flopping in the breeze.

And what about the nose on that boy? It resembled a hound’s nose for sure.

The dog and the boy grew up together, never far apart except when the kid went to school. When the boy was away, the dog concerned himself with interests common to dogs. 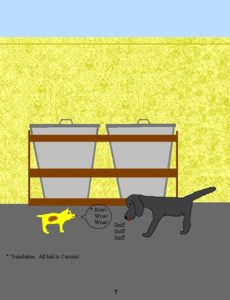 He sniffed the neighborhood and ran off dogs that did not belong there. There were some mangy mutts around, and Cassius didn’t like them on his turf.

The neighborhood was his domain, and only the dogs that paid him the proper homage were allowed to hang around.

Proper homage was something the dog enjoyed immensely.

As for cats, the dog chased them. 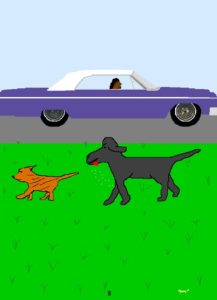 Nothing gave him more pleasure.

A typical day would go like this: Cassius trotted around the block, nose to the ground, in search of the stinky smell of feline.

He caught a weak scent near the alley that got stronger as he explored.

The smell got stronger. 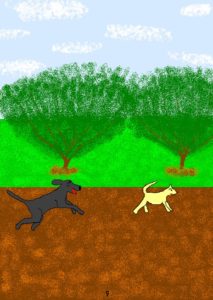 The hound caught sight of the cat. The chase was on.

Across the street they ran, the cat fleeing in terror, the dog in close pursuit.

The chase brought cars to squealing stops. The cat and dog scrambled under hedges. They jumped over fences.

Finally, the cowardly cat found a tree and shot up into the branches where the pursuing dog could not follow. 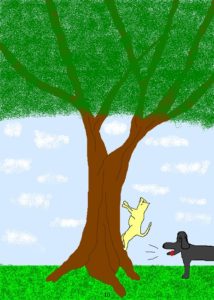 The dog performed a ritual he had recently perfected.

He scratched the ground with his paws like a bull would do. First his front paws, then his back ones. He finished by lifting a leg, and with a satisfying pee, he claimed the tree and everything in it as his.

It was his victory celebration.

Not to mention, it annoyed the cats.

One cat in particular – a gray, ugly, sorry excuse for a tomcat – gave Cassius his greatest joy. 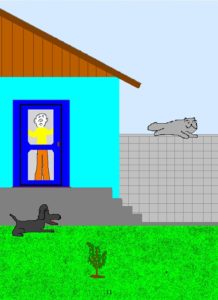 There was nothing special about the cat, but the guy who fed it was hilarious.

The young man with no hair didn’t like Cassius chasing his cat, so he watched and waited.

For fun, the dog sneaked into the man’s yard and pretended to hide. He knew the crazy man watched him; he could see him through the screen door.

When the gray tomcat appeared, the hound leaped from his hiding place and chased the cat around the yard.

The bald guy ran out of his house, eyes bulging in anger while screaming all manner of obscenities at the dog. 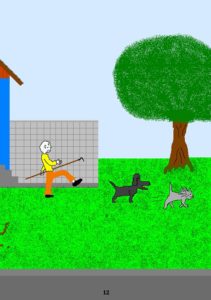 The dog ran around the yard as the guy chased him and tried to kick him and hit him with a hoe.

Cassius was too fast for the irate man, who yelled a good game, but who didn’t have the coordination to catch a turtle.

The thrill of the chase never failed to satisfy the dog, whose bouts with the seething neighbor were legendary on Mesa Street.

The dog actually liked cats, although he wouldn’t have appreciated me telling you that.

That is, he liked cats until the Day of the Ten Claws. 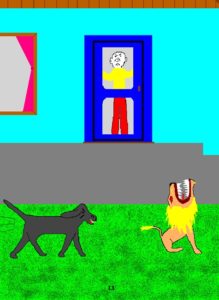 On that fateful day, the dog was meandering about the neighborhood hoping for a spot of mischief, when he saw a lean, muscular, yellow cat with a big head.

The cat was hanging around the crazy guy’s house. Cassius could see the bald man watching through the screen door. The man made no effort to hide.

The dog was fascinated by the cat. He had never seen a cat like this. The head was soooo big. He noticed that the cat did not appear to be afraid. The cat saw the dog and didn’t make a move to flee.

Cassius took that lack of fear as a personal insult. He broke into a sprint and charged the cat. The dog fully expected the cat to turn tail and flee once it understood the dog’s malicious intent. 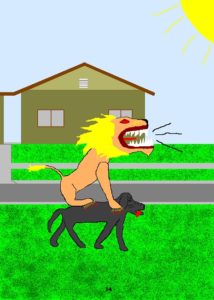 But the cat jumped up into the air, and as the dog ran under him, he dropped onto the dog’s back.

The ferocious cat dug his claws deeply into Cassius. This caused so much pain that it felt as if there were ten claws in each cat paw, hence the name Day of the Ten Claws.

It is a day that lives forever in neighborhood canine history.

The cat rode the dog, screeching “YEHA!” in cat language, and “YIP, YIP, YIP!” like he was some kind of cowboy riding a bucking bronco. The pain was intolerable. 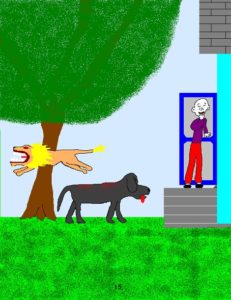 The dog and cat raised quite the ruckus that day, but the once-proud dog couldn’t shake the demon cat.

Finally, the cat got bored. He retracted his claws, jumped off the dog and casually ambled away. The dog limped out of the yard, head bowed, back bloody and feeling fire in each of the puncture wounds left by the cat’s claws.

The gray tomcat’s owner stood at his door giggling madly. It was clear the doofus had brought in a cat ringer. Probably brought him in from Japan or Korea, where they teach katate and kat kwon do.

On the Day of the Ten Claws, Cassius lost face. He suffered a loss of dignity so horrible, he could hardly bear it. 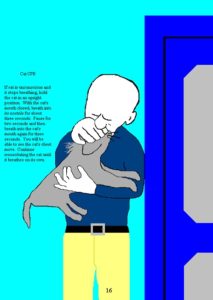 But rather than learn from his mistakes and perhaps change his behavior, Cassius let the humiliation of the cat’s attack fester and grow in him until he was consumed by an irrational hatred of cats.

A different Cassius now patrolled the neighborhood. He avoided the big-headed cat, but woe to any other feline that crossed his path. The cats learned to fear and avoid the dog.

The boy and his siblings soon changed their minds about Cassius Clay. The champion changed his name to Muhammad Ali, and he gave up the grand prize of the world, the heavyweight championship belt, for a principle. 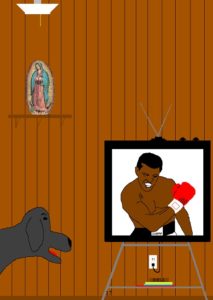 Ali, as he is called, refused only one fight: the Vietnam War, which he considered immoral.

The heavyweight title, which no opponent could take from him in the ring, was taken by shallow, little men in suits who had no honor.

Finally, after three years, the Supreme Court, the highest court of the land, overturned Ali’s conviction for refusing to serve in the military. Ali returned to the ring.

The boy, his brother and sister, out of ignorance and pettiness, had named their dog after a man they despised.

Now they were proud they named the dog they loved so much after a man whose unwavering principles proved that no matter who claimed to be champ, Ali would always be king.

He was the greatest of all time, just as he had bragged. 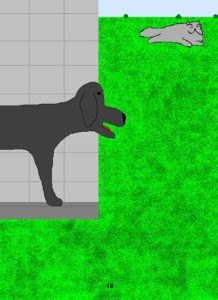 Clearly, the dog was not perfect, yet he deserved his famous name. For you see, the boxer wasn’t perfect either. Despite all the acclaim, the champion was, after all, a man.

Ali had flaws, sometimes treating opponents with the disrespect the dog showed the cats.

They were both, simply, the greatest.

Moral: Don’t be bitter and hold grudges or you will tarnish your own greatness.

This story was written not only as a tribute the my old hound Cassius, who I have had years of life and numerous dogs since to compare him. He was truly the greatest dog of all time.

But it is also written as a tribute the a great man: Muhammad Ali, who died Friday, June 3, 2016. After years of life and watching numerous boxers, I can say, he was truly the greatest boxer of all time. But he was more than that; he was a great human being and humanitarian whose appeal was worldwide.

“The man who has no imagination has no wings.”
Muhammad Ali