They called him Monkey.

He was short, brown, had big ears and a smile wide as the Pecos River.

He was a most interesting-looking fellow.

When I first saw him, he stepped onto the basketball court as if he owned it.

Then he owned us. All of us on the court.

He moved around the court. Smoothly.

He mesmerized us with his grace.

He flowed. Then suddenly he moved the other way. 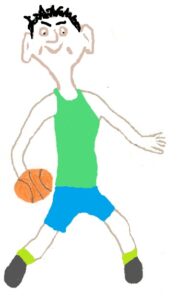 That’s how it was when I met Monkey. I liked him immediately.

I had recently moved into the neighborhood. I now discovered I was playing on Monkey’s court.

I emulated those moves. He helped me master them.

In the finger-freezing cold of winter.

In the blazing heat of summer.

I met Monkey there on the Eddy School court.

I never matched him, but I learned to be competitive.

I held my own against Monkey until he unveiled a new move, a new trick, a new shot.

Monkey’s most  dangerous weapon was his imagination, which guided his wizardry.

And defense? Forget about it.

Monkey was quick, and he stole that ball.

Although he was short, Monkey could swat your shot.

He intimidated players just by waving his arms. Pass and he steals the ball. Shoot and get blocked.

My favorite times on that court were when Monkey and I were on the same team.

We had our moves.

A bounce pass between a defender’s legs.

It was our court.

Kids came from far and wide to play.

It didn’t matter your talent or how you shot the ball.

All that mattered was the game.

It was Monkey’s game. He decreed that everyone play.

He was the best. Those who competed against him learned.

And that, I think, is the highest compliment Monkey would accept, that he taught you something.

I first assumed Monkey got his nickname because of his height, big ears and perpetual smile.

Though the name may have be given derogatorily — playground kids can be cruel — I didn’t consider it so.

The first sightings of Monkey coming down the street toward the court always elicited loud cries from the kids of “Monkey! Monkey!”

He basked in the attention.

Did the nickname bother him? I truly don’t know. He never complained.

Imagine a monkey swinging through the trees. Effortlessly.

Vine to vine. Tree to tree.

Now picture my friend Monkey. No vines to swing on. No trees. No jungle.

Only a big concrete slab of court and a basketball that came alive in his hands.

Imagine a small boy, pure muscle and grin, flying effortlessly toward the goal and gently letting the basketball fly off his fingertips.

Basket! Nothing but net!

This story is dedicated to Monkey, a childhood friend and basketball mentor.